The US Marines were looking for extra protection from IEDs (improvised explosive device) on their Humvees. They chose SPI’s Dragonshield-HT® ERC polyurea coating for its exceptional blast mitigation properties. When applied thick enough to high hard steel, a Dragonshield-HT® ERC protective lining will help deflect blast fragments, which are the cause of most injuries, deaths and damage in an explosion. 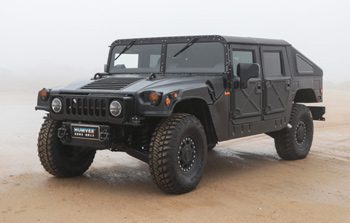 The coated doors were then tested against a 7.62/54R of ammo. The military considered the stopping power of a Dragonshield-HT® ERC blast mitigation solution similar to that of 9.4 mm rolled homogenous armor steel. It gave them an approximate 15% weight savings, making it easier for the Humvee to travel in rough terrain.

The US Military purchased thousands of gallons of Dragonshield-HT® ERC polyurea coating to protect the Humvee occupants from injury while serving in theatre. Over twenty years later, SPI continues to supply the US military with unique blast mitigation solutions.