Seattle’s Jewish Family Service (JFS) was constructing a new 19,000 square foot building in the city’s downtown area. The building was to feature a 1766 square metre roof-deck courtyard, with a large planter box. This roof deck required a high performance roof coating solution that could endure Seattle’s notoriously damp climate. The contractor was tasked with finding a performance coating guaranteed to remain effective for years to come. JFS has a history in Seattle stretching back over more than a century; they had no intention of investing in a performance coating that would require replacing within a few years.

The contractor evaluated several different protective linings, including epoxy, sheet liners, and polyurea elastomers. Vector Construction was awarded the project and recommended using the Aquaseal™ Synergy Series and Polyshield HT™ 100F polyurea coating system. Given the client’s demands, the contractor felt that a product from a reputable company, with a 25 years guarantee, was best suited the job.

There are many reasons why SPI’s performance coatings were chosen for the project. Unlike sheet liners, SPI’s polymer coatings form a seamless, waterproof membrane, dramatically reducing the potential for leaks. The elastomeric performance coating also has superior flexibility compared to traditional epoxies, giving it the ability to expand and contract with the concrete as the seasons change. 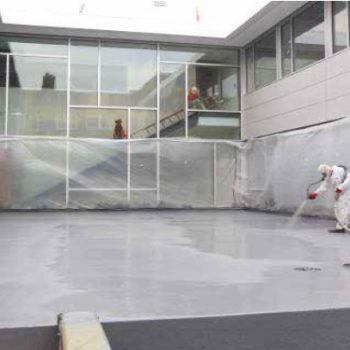 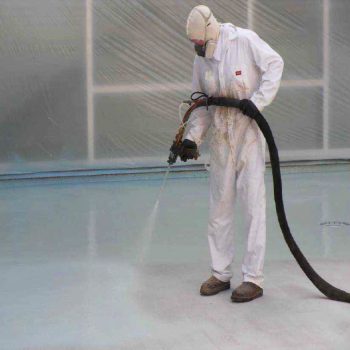 With only a 30 hour window before the next storm, Vector swept and air-blasted the concrete surface to remove any dust and surface latents. An Aquaseal™ Synergy Series polyurea coating was applied in lieu of a conventional primer. Then a 0.76-1 mm base coat was applied using SPI’s LPG™ portable low-pressure proportioner. The low weight of the proportioner let the crew easily move the equipment package and coating material onto the roof deck. Within a few hours, Polyshield HT™ 100F had been applied as a 1.5mm topcoat, and the project was complete.

With lightweight equipment and a quick, easy application, the protective lining was completed well within the time limits. Vector Construction was able to swiftly implement the coating before Seattle’s poor weather could bring work to a standstill. The general contractor was satisfied that they had laid a high performance coating that would remain effective in the future. JFS was confident that their new headquarters would withstand a difficult climate for many years to come and here we are in 2017 and no complaints!