A set of new evaporation containment pits were constructed to serve a nearby set of oil fields. The pits serve as containers for oil field brim, and facilitate the cleanup and disposal of oily water produced by the drilling process. This large-scale project necessitated a high performance coating solution that could remain effective, while also allowing for the detection of leaks. SPI was chosen for their expertise in customizing performance coatings to suit complex projects.

A unique design was formulated using a polyethylene grid between a basecoat and topcoat of SPI’s Polyshield HT™ performance coating. This created primary and secondary containment layers that were divided into cells. Each cell was able to be electronically monitored for potential leaks between the two protective linings. Polyshield HT™ was chosen for its durability and seamless composition. The applicator sprayed a basecoat of 0.75mm Polyshield HT™ over the Amoco 2044 geotextile fabric that lined the pit. This was followed by the placement of a polyethylene grid, and then another layer of Polyshield HT™ polyurea coating was sprayed over the geotextile fabric. 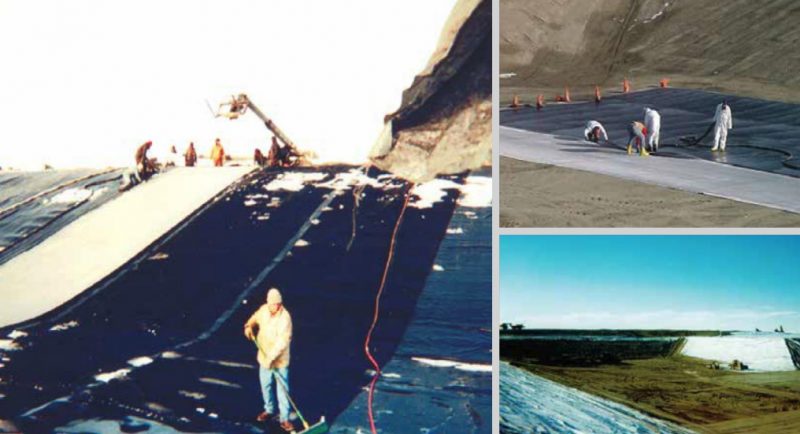 The facility owner was satisfied with the work, and confident that the new high performance coating would stand the test of time. 14 years on, the combined polyurea coating and leak detection system remain as effective as ever, and are still guaranteed for a further 11 years. In fact, the facility was so happy with the results, they commissioned an additional performance coating project in Autumn 2007.