One of the world’s largest underground mines wanted to extend the life of a process hopper, that had been highlighted as suffering from corrosion to the lower steel cone during an inspection. The hopper is responsible for storing and dispensing thousands of tonnes of processed iron ore granules every week, a task crucial to the mine.

The corrosion within the hopper occurred as a direct result of the storage of processed iron ore, mined from deep underground. Extraction of the ore brings with it large amounts of natural salts, which act as a very effective electrolyte – a key catalyst for the corrosion of steel, and hard to combat without an anti-corrosion coating.

Due to varying temperatures throughout the year (-18 to +25°C), condensation creates the perfect conditions for steel corrosion. Combine that with the natural salts present and you have an extremely corrosive service environment, one that can only be controlled with high performance protective coating.

The Project owner decided to use EonCoat CR for a multitude of reasons, any one of which, on its own, would have a great advantage over more conventional performance coating systems. Before the application of EonCoat could begin, many years of iron ore deposits had to be removed from the steel hopper using mechanical hand tools, with some deposits a few inches thick in places. This on its own is a hard task. Considering that the work had to be carried out many metres up, by a team of rope access technicians, the project became one of considerable complexity.

Once the heavy deposits had been removed, abrasive blasting was carried out to remove the remaining ore and surface corrosion to SA2 /SA2.5 (SA2 was the minimum standard acceptable on this project but in most areas SA2.5 was achieved). An anti-corrosion surface preparation standard of SA2 was deemed acceptable, given that this particular steel hopper had not been previously painted, and displayed no visible Millscale.

When all blasting had been completed, the lower section of the hopper was washed with potable water to remove blasting debris deep within the surface profile. The levels of chlorides (salts) became very apparent, and the hopper began to flash rust minutes after the washing process. 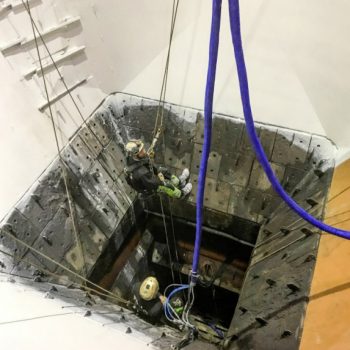 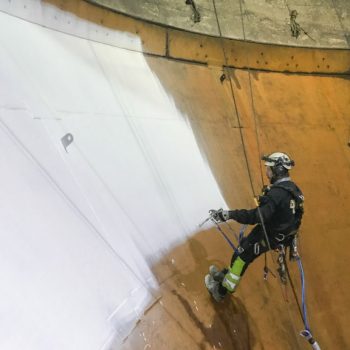 It was also noted that the steel had been subject to very heavy surface pitting, so much so that our surface profile gauge was not able to take any accurate readings. In some areas this was in excess of 5mm, but unlike more conventional anticorrosion coating systems, this posed no major obstacle.

When the tank had dried sufficiently we were able to apply an EonCoat performance coating directly to the steel surface without any further surface preparation methods. EonCoat CR was applied to the lower section of the steel hopper at a nominal coating thickness of; 800 μm (800 microns or 0.8mm) WFT in a single coat, applied over an eight hour shift.

The following morning the entire area was pressure-washed (3500 psi), letting us see if the application of the EonCoat was a success. Unlike more conventional anti-corrosion coating systems, EonCoat will simply wash off if it doesn’t fully react with the substrate, allowing us to remedy any problems before returning equipment to service. Over the whole area only three small patches, less than three square feet in total, were subject to reapplication using a small cartridge gun.

During final inspection it was clear that the EonCoat had performed exactly as expected. Passivation of the steel from formation of magnesium iron phosphate (unlike polymer high performance coatings,) produced no pinholes, voids or delaminations in the finished EonCoat application. This is due to the reaction between the Acid and Base, creating a negative charge within the EonCoat CR that physically pulls it into every surface imperfection, eliminating the need for stripe coating!

The Client was very happy with the success of this project with such tight time restrictions and they have already approved EonCoat CR for further upcoming coating projects throughout the mine!