The Water Authority regularly attends industry conferences and monitors trade journals and literature in search of technological advancements that can be used to protect their assets. As part of this ongoing work, the Agency’s engineers and technicians read a case study in Materials Performance magazine in May 2016 that described the use of EonCoat®, an anti-corrosive primer. A representative from SDCWA then contacted EonCoat, LLC and an executive from the company was dispatched to meet with SDCWA.

III. FIRST USE OF EONCOAT® BY THE WATER AUTHORITY

Upon learning that use of EonCoat® could provide highly durable and longer-lasting protection than other coating products the Water Authority had used, as well as significantly reduce staff time spent on corrosion prevention and mitigation techniques, a set of structures were identified for test application of EonCoat®. For the test, the Water Authority used a planned outage on a portion of their aqueduct system as the opportunity to apply EonCoat® to the seven mechanical appurtenances (‘units’), listed below. The appurtenances were removed from their below grade vaults and trucked to a blasting and coatings facility in San Diego County.

The units arrived by truck at the blasting and coating facility on November 21, 2016. The condition of the units reflected years of use in subterranean vaults which often involved high levels of moisture and at times submersion in standing water. The units also bore the indication of on-site maintenance efforts to spot blast and paint to mitigate the most extreme impacts of corrosion. Figure 1 shows several of the units as received. 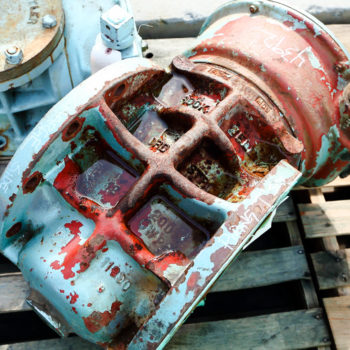 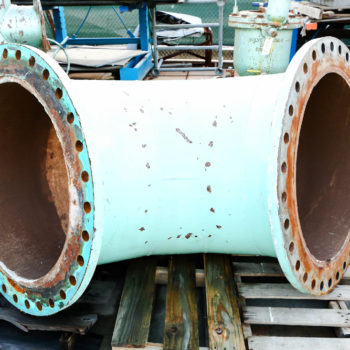 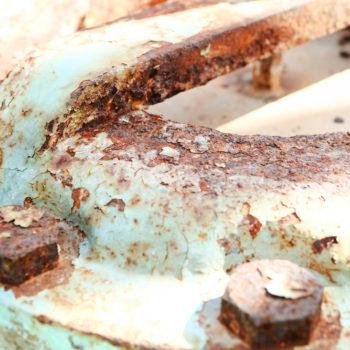 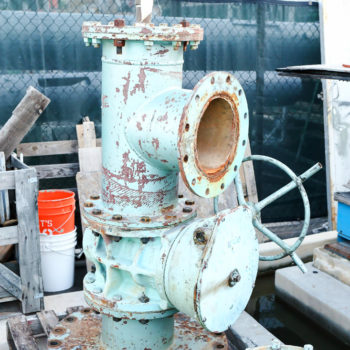 In accordance with the EonCoat® Surface Preparation and Application Guide, the 4 units were degreased and blasted to a NACE-3/SSPC-SP6 level of surface preparation.  The old paint was removed as was a significant amount of grease that had been placed around the bolt holes of the units. Multiple layers of various paint colors on the units demonstrated their prior maintenance history. Once the units had been blasted, they were allowed to flash rust. This desired level of surface rust—specific to EonCoat’s desired surface preparation—was different than how the Water Authority had previously prepared units for primer. Figure 2 shows the units, once blasted, with flash rust. 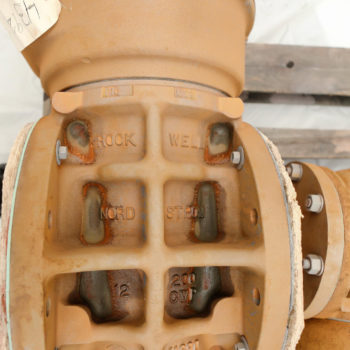 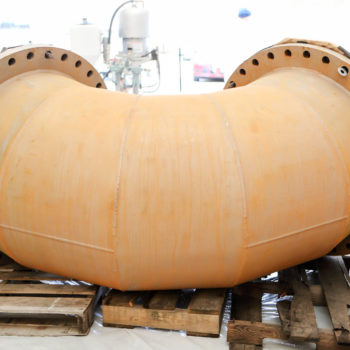 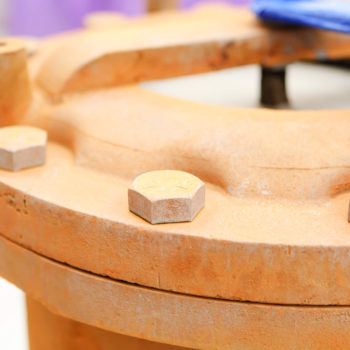 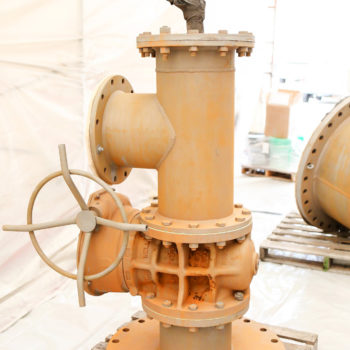 EonCoat® was applied at a coating thickness of 20 to 25 mils, per the manufacturer’s guidelines. The primer was spray-applied using a Plas-Pak Quad 4 x 400ml air assisted cartridge system with a static mixer attachment. In several of the more difficult-to-reach grooves and recesses, a battery-assisted cartridge gun with a static mixer was used. In these cases when the EonCoat ‘touch up kit’ was used, the coating was then applied via brush and not by spray application. Figure 3 shows some of the units with EonCoat® applied. 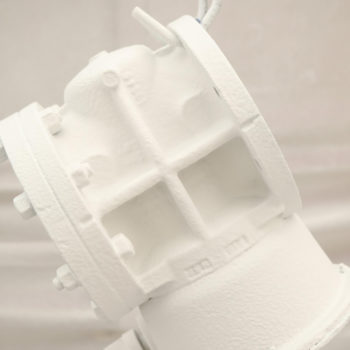 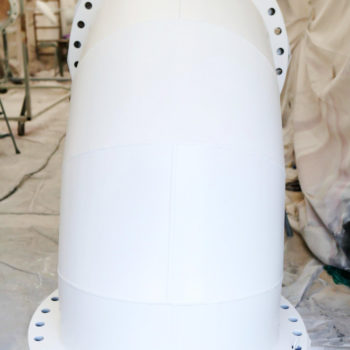 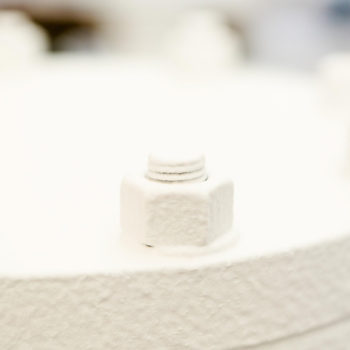 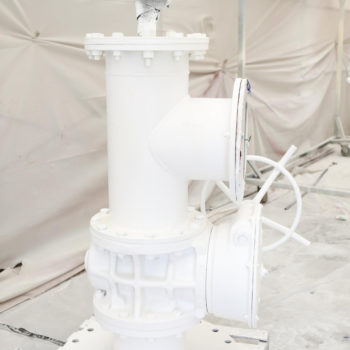 Within 1 hour of applying EonCoat® primer, a topcoat can be applied. To allow for a color match with SDCWA’s requirements, PSX-700 in color FS 14664 was used. The topcoat was spray-applied at 3 to 5 mils. Due to the rain that fell during several days of the job and the high level of moisture in the spray area, in most cases, two hours was used to allow the EonCoat® primer to cure before the PSX-700 topcoat was applied. The PSX-700 was spray applied to the units using an Anest Iwata HVLP 200 conventional spray gun.

V. RECEIPT OF UNITS BY WATER AUTHORITY/REDEPLOYMENT OF UNITS TO THE FIELD

Upon job completion, the Water Authority picked up the units by truck and delivered them to a holding facility in the Lake Murray region of San Diego County. The units are scheduled for reinstallation in February 2017. Figure 4 shows the units that have been blasted and sprayed with EonCoat® and a topcoat, being loaded into Water Authority trucks for redeployment to the field. 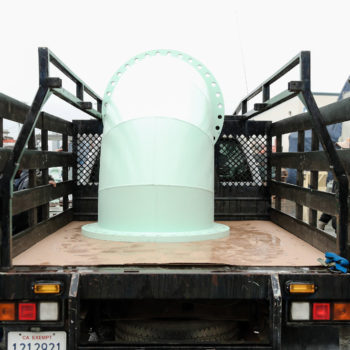 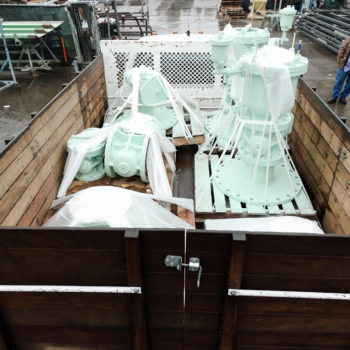 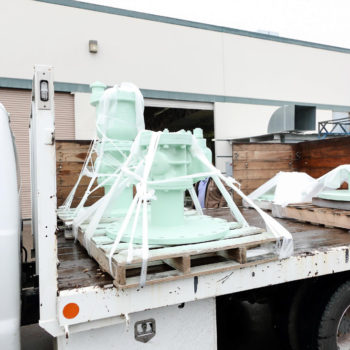 VI. CONCLUSION AND SUMMARY BY PARTICIPANTS

“We are grateful for the opportunity to work with The Water Authority to serve the people of San Diego. By applying EonCoat over rusted steel, the Water Authority is able to reduce the cost and downtime of an outage. In addition, the rapid cure time of EonCoat® compared with traditional industrial coatings allows for faster return to service. And unlike most anti-corrosive coatings, EonCoat® is environmentally friendly since it is inorganic, non-toxic, water based, contains no VOCs, no HAPs, is non-flammable and has no odor. The next test is for EonCoat® to be used as a standalone coating over in-use units so that the equipment does not have to be taken out of service during the maintenance work”, states Merrick Alpert, President of EonCoat.

Daryl Akioka, the Water Authority’s Project Manager for the coating application states that: “At the Water Authority, we pride ourselves on being ahead of the curve for all types of technology. This includes the ever-changing coating industry. Although most of our assets are underground, it has been a challenge to get proper protection for our above ground appurtenances too. We are very excited with this project and are hopeful that EonCoat® can supply a solution to aggressive maintenance schedules and annual re-coating of problematic appurtenances.”