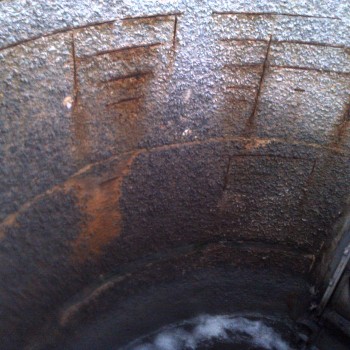 The waste water treatment industry has to deal with lots of different corrosive hazards, but few are as severe, and as undetected as sulphuric acid corrosion. Only recently are we discovering the full extent of the problem and we must confess, we find it quite fascinating.

So grab a cuppa and let us tell you all about it.

Between the 1960s and the 1990s, wastewater treatment facilities were encouraged to enclose their digester tanks in a bid to control the release of landfill gases (really smelly ones) into the atmosphere. In the absence of gaseous oxygen, conditions inside the tank become anaerobic – a completely natural, process dramatically intensified by the newly covered conditions.

Whilst bio-fuel is a naturally occurring bi-product of the digestion process, corrosion within the head-space of the tank is a common occurrence, affecting both the walls of the structure and the tank lid.

In recent years however, a far more alarming corrosion hazard has emerged, which if left untreated will dramatically shorten the life expectancy of digester tanks throughout the UK. This hazard is sulphuric acid corrosion – and it can cause tank leakage, devastating asset failure or even contamination.

This highly corrosive, raw acid is denser than water, which means it sits within the water line, attacking the calcium carbonate within the concrete structure. This aggressive chemical corrosion is far greater than any corrosion experienced elsewhere within the digester and has even been responsible for causing significant damage to enamel coated steel modular tanks.

You might be asking yourself how this went undetected for so long?

When lids were placed on digester tanks all those years ago, there were a number of different factors, like moisture levels and tank temperature, which were thoroughly investigated to ensure that the new anaerobic conditions were not hazardous. With so many variables to consider, the increased hydrogen sulphide levels were not seen as a potential risk factor.

Fast forward a couple of decades and the sulphuric acid has begun to take its toll on many tanks, meaning site operatives are beginning to see the effects of this so far undetected danger. For many sites, it is now a race against time to protect concrete digester tanks from irreversible degradation.

The result? A series of corrosion rings moving down the inside of the tank. The most severe damage will be visible right where the sulphuric acid has settled on top of the organic matter.

Due to the infrequency at which digester tanks are emptied, cleaned and inspected, the raw acid corrosion is going undetected for some time. In most cases these tanks would only be emptied as part of plant extensions, meaning the damage is often only identified once leachate is seen escaping through the exterior of the tank wall.

Time for some good news?

The good news is, many sites have now started to remove the tank lids during planning maintenance, which is making the problem easier to detect.

How to protect against corrosion and rust with performance coatings?

Performance coatings are an increasingly popular way of protecting tanks from rust and corrosion, as well as ‘rustproofing’ them, because they offer fast return to service – in fact, our polyurea coatings are inspection ready in minutes and ready for recommissioning in as little as 24 hours.

In some instances, a tank can be taken out of service, emptied, cleaned, prepped, coated and tested, in under a week, which is considerably faster than any other form of corrosion & rust protection.

Why not check out our product specifics here?